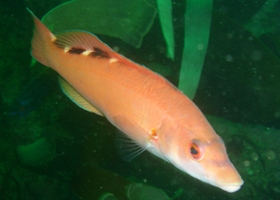 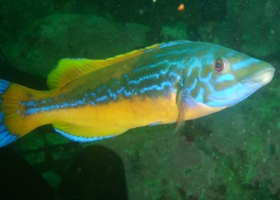 After rather a lot of dithering around (mainly on my part, though I will pass a little blame onto an unnamed other…), Iain, Teresa, Roger, Paddy and myself were finally ready to depart on a nice little 5 day jaunt to sunny Plymouth. After a slight jostling and jiggling of cars (well, I couldn’t be seen to be driving on a dive trip now could I!) we were off. Bank holiday Monday traffic was kind, Paddy was happy (and by that I mean asleep) and the week was going well….

The day started at a wonderfully leisurely pace – up for 8, away for 9, fantastic… Only, have you ever tried parking in Plymouth, the world’s most car hating city?? 45 minutes of frantic looking around followed, ending in two 12 pound bills for the day. But hey – the kit and the divers were on the boat, the briefing was given and all were happy (especially Paddy, who found a nice big lumpy buoy to use as a pillow). The skipper, having dived from the age of 8, had lots of knowledge and experience so a cracking day would surely follow.

Dive 1 – The (not) Scylla
Ever wondered how you lose a 2500 ton, 113m long naval frigate? Answer - sink it and then assume the buoy you’re looking at is tied to it, and don’t check. Easy if you think about it. Roger and Teresa were first in, and first to discover the highly interesting sandy sea bed. Due to his sheer excitement and love for sand (nothing at all to do with being scared of what abuse would befall him if he was the only one to lose the wreck) Roger decided to tough it out and ended up seeing some nice rocks and a lovely spider crab.
The rest of us had a different plan. “Lets follow the line of the buoy in the sand, and the wreck will be there” was the collective thought…
Only it wasn’t.
And the line vanished after 5 minutes too.

Dive 2 – The James Eagan Layne
When you have the opinion that anything is better than the first dive, you are rarely disappointed. We weren’t!! The Layne is a fantastic wreck – intact enough to see that it once floated, but broken enough to have character. All had a fantastic dive with a couple of highlights being quality little swim-throughs, several congers and a patch of pink sea fans (a first for several of us).

Having missed the Scylla, Brian the skipper (who’s dived since the age of 8 you know) had kindly agreed to get up early and squeeze us three dives in. Brilliant!

We duly had brekkie at 7:30 and piled into the car for 8. A quick call to the skipper to confirm things put a stop to the fun however. Force 5+ southerly winds and south coast diving don’t mix apparently! Thursday was looking ropey too.

So, what to do in Plymouth when you can’t dive? Easy, have second breakfast and worry later. Or, if you’re Paddy, sleep. With second breakfasts consumed, the decision was made that if you can’t be underwater, then you may as well look longingly at it through glass. We were in the home of the National Marine Aquarium after all. A good day followed, highlights of which include the many wonderfully under controlled children and the purchase of Sharky (a treat which you will only experience diving with Roger or yours truly). The world’s most obese conger and Snorkel the turtle were cool too.

A little surfing (where Roger and I showed the locals a thing or two!!), some kite flying and a hand of poker (which was the first thing to truly wake up Paddy all week) rounded the day off nicely.

“Lets get up nice and early and go shore diving.” Good plan that, only we got to the “Lets go collect kit” bit and could no longer be bothered. Cue second breakfast again!! (Oh, and a bonus 20 minutes of happiness for Paddy!)

In the hours that followed Teresa convinced Iain to play cowboys with her, while we tried to convert them both to the much more eco friendly pass time of karting. We won - the horsies were busy.

Cue the first inaugural Stingray Grand Prix! After an opening heat affected badly by rain there was little on show to worry the Michael Schumachers of this world. However, as the second round developed into a dry sprint, a certain club DO (hence forth known as Bansai Crampton) showed a rare flash of brilliance to pull an awesome lap out of the ether – nearly toppling the crowned prince of the SCUBA karting world (yep, yours truly!). The final session was a grueling affair, with more than a little incident – Paddy tried to run people off the road, Roger decided that brakes were optional for tight chicanes, and Bansai Crampton continued to pump in the low times, shocking everyone who’d witnessed his first few laps. A celebratory round of real Frankie and Bennie’s Coffee (plus waffles and ice cream for Paddy) and another game of poker and the day was complete.

Woo Hoo!! We’re diving again! Just a little 2+ metre swell and a 9 mile cruise to the dive site to cope with… Paddy used his time machine to avoid the trek – he slept. The rest of us, however, were treated to a tirade of ‘70s comedian humour/abuse from Brian’s (remember – he’s dived since the age of 8) dad, Dougie (who probably took him). Bare with us on Dougie, we grew to love him…

Dive 3 – The Eddystone Light House
Close your eyes (ok, not right now, but when you’ve read this) and picture the scene: Pink sea fans, more colourful fish than you can shake a stick at, petty rock formations… Right, is the picture you have still in the UK? If it’s not then come on home and dive the Eddystone. When you get on the right spot, and the current takes you the right way it can be a superb dive – well worth the trip.

Dive 4 – The Scylla
The conversation when we arrived on site went something like this:
Iain: “Is the buoy tied on today”
Dougie: “P*ss off. That’s my buoy, I tied it, f***ing right its tied on.”
Lee: “Are you sure because that’s what Brian said and it wasn’t…”
Dougie, after passing over wreck with sounder: “There, you see. Now, are you getting in or am doing the bl**dy dive for you as well?!”
Random RIB driver shouting just as we were about to jump in: “Our guys have just been in and that buoys not tied onto the wreck you know…”
Dougie: “£$%£$%£$%£$%“

Fun and games aside, this is a fantastic wreck. Its been down long enough to have proper character and is breaking up in places – the hanger is completely open topped now!! A great dive was had, with much poking around, a little close deck inspection by Paddy (ask him about helicopter pads…) and no cleaning rust off on deco stops at all ;-)

The day was rounded off nicely with Dougie offering us his compliments and promising hot donuts and sausage rolls for Saturday – the “I’m warming to him” process began.

Lower winds and a much friendlier Dougie made for a great start. The swelly ride out the dive site wasn’t quite so good, but after getting in the diving more than made up for it.

Dive 5 – The Rosehill
This is a gorgeous wreck, shotted perfectly at the two huge boilers by the Dougie/Oakie double act. We were greeted by shoals of 2 foot bib and a few big congers, closely followed by a swim across a field of huge sea fans on a hull plate twice the size of a double decker bus – beautiful. Bansai Crampton even found the gun. That boy is truly talented!!

Dive 6 – The Layne
Our return to this pretty little spot was much anticipated – and again the Layne delivered (though not quite as much as she would have if I’d spotted Roger’s manic gesticulations about the scallop bed I missed). Roger, Paddy and myself had a little mooch, while Bansai Crampton again showed his diving prowess by spotting a dogfish. Roger and I had to satisfy ourselves (and Dougie whom we actually impressed!!) with Sharky (again – you’re gonna have to dive with us to find out more…). Following the dive Roger ensured we got a very fast ride home and also let the skipper show just what a TOP bloke he truly was. More importantly he gained an edge deciding where to eat tea. Generously (especially for an honourary Yorkshire man as tight as him…) he then paid for it as well! Paddy did his bit by keeping the drinks flowing.

Dive 7 – The DDRC Pot…
One of us went solo diving for 2 hours. Fantastic scenery (Kim Basinger in LA Confidential) and a very interesting kit configuration (surgical scrubs and huge “condom-head” mask). Oh and the PHAT-est Oxygen enriched air ever. #1

We got up and ate first breakfast before packing kit. Then after pausing for second breakfast, we came home. Paddy spent the first hour of the journey being happy, before a sore posterior woke him up.

This was an interesting trip, with many reasons for deciding that Plymouth is a blighted place never to be returned to. However, there are a few demons to exercise, many great dives still to do and an ex-marine named Dougie who we’d all like to dive with/be abused by again in the not so distant future. Also, some of us made a dear friend, Bob – those who knew him would greatly like to revisit him in the future… My thanks to my four fellow divers for your patience in putting up with the ups and downs of the week, and for making this trip as easy to run as circumstances would allow.

#1. We can laugh about it now, but on a more serious note, Roger developed a suspected bend shortly after the last dive. With swift action by all aboard (Dougie really is a top bloke and an efficient and professional skipper) we got him quickly to the DDRC and the problem was completely resolved. A timely reminder to us all that the utmost care is needed when diving and that you should be alert for problems even if you did nothing wrong. Also a very good argument for having everyone 1st aid and O2 admin trained. Roger had followed good practise and done nothing unusual, but may have been dehyrdated and tired due to seasickness, He also did the right thing by admitting he had a problem straight away. Look after yourselves out there!

Many thanks to Dr Sykes and the team at DDRC The DDRC is a charity and donations to further the cause of diving medicine are happily accepted.