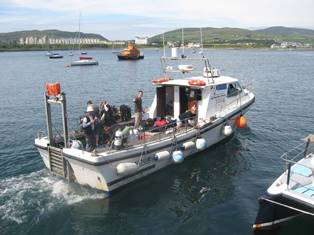 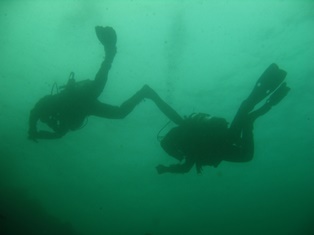 I've wanted to go back to the Isle of Man for ages, and this year made the booking. For various reasons we only ended up with half a boat, but as 6 was the minimum according to the dive centre, we were OK. With four squashed in a car, one on the train from York and one from London, we met up at Liverpool Docks to board the ferry. The ever so quaintly named 'Isle of Man Steam Packet Company' runs regular services from Liverpool and Heysham, steam no longer though, instead a huge high speed catamaran named 'Mannanan' whisked us away to this Celtic Isle. Did I mention the Isle of Man is quite literally another country? It has its own language (currently undergoing something of a revival), currency, parliament and laws. Lately famous for the TT motorcycle races and as a tax haven, it has a long and interesting history.

All very well you say, but what about the diving? Sitting right in the midle of the Irish Sea, it has a warm climate and is regularly washed by strong currents and frequent storms, hence its rocky shores enjoy clear water, a great abundance of marine life, spectacular underwater scenery and a treasure trove of shipwrecks, making the Isle of Man an excellent diving destination.

We'd booked a week's diving with Discover Diving in Port St Mary. As we were all grown ups and only 6, we eschewed the rather basic bunk house above the dive shop and found ourselves a nice apartment with 3 en suite rooms, a full kitchen and big lounge with floor to ceiling windows providing an amazing sea view. Said apartment turned out to be owned by the rival dive operator in the town, but this proved to be no problem at all.

We had one car between us but everything was in walking distance really and the dive shop ferried the heavy stuff about in their van, they also picked up and returned our foot passengers to the ferry and provided tanks and weights included in the dive package so being a foot passenger was a feasible option. We stocked up on food in the co-op (the biggest single shop they had seen all week :-) ) met our host & skipper for the week (Michelle) and sorted out the plan for tomorrow's diving. it just so happens that Michelle writes a column in a certain diving magazine, so anything embarrasing we did on this trip was highly likely to end up in print at some point. even this threat did not stop me making an idiot of myself on several occasions, so I just hope nobody recognises us if we are written about ;-).

Now I have to mention that on arrival, the Isle of Man was having some of its famous 'weather', the whole place was wreathed in mist, everyhting was dripping wet and we could hardly see the road in front of us on the drive down from Douglas to St Mary, this 'weather' would be a bit if a feature during the trip, but it didn't stop us diving, which is the main thing.

Discover Diving's boat Endevour falls into the best class of British dive boat in my opinion, large, well laid out and as is often the case with a lady skipper - spotlessly clean and with the best creature comforts. We were also well supplied with cakes and treats after each dive :-).

I could write a very long report buit for now I'll just say it was really good diving, with particular highlights including the wreck of the Thracian (NB: rather deeper than 35m on high springs) and the profusion of life on the Burroo (which is not pronounced how it looks). We lost one day due to high winds, but there was plenty do to topside visiting castles, finding ice cream shops and walking along the magnificent cliffs above calf sound, so we didn't mind.

See the gallery for photos.

[Index], [Trip Reports]
All information on this site is Copyright (C) Iain Crampton, Stingray Divers 2002-2014 unless otherwise noted, No re-use without permission. If you wish to use any material from this site please contact me, Thanks.