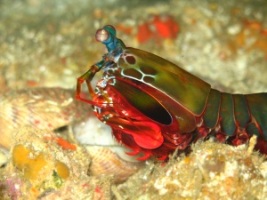 Two weeks in the Philippines, a very long way to go (two plane journeys and more than 24hours travelling each way),but possibly the best place to try out my birthday present - a new digi camera and underwater case.

Take a look at the photos.

I don't want to give a bad impression of this trip, as I did enjoy it, two weeks on a tropical island with my girfriend and three dives a day can't be bad, but it was also a real eye opener to the state of the pacific, economically, socially and environmentally. The dynamite fishing has to stop, for one thing. I also discovered I am soft and really need air conditioning above 30C :-).

My complaints would be: Malapascua is promoted as the 'Thresher Shark Place', sightings every day, say the brochures & websites, all the boats have threshers painted on them. While we were there there were two sightings of a lone shark in a fortnight. If they didn't go on about it you wouldn't mind and could even view threshers as a bonus, but their marketing leads to to disappointment.

With a few exceptions, the hard coral is trashed by explosives, it is rubble and will take decades to recover if they stop fishing, as it is now, Malapascua's fringing reef is smashed and the island is going to erode into the sea (People come and dig holes, then sweep up and bury the broken coral on the beach to try and keep the illusion of soft sand).

Endemic corruption, hearing the dive guides and locals talk about the local governor, who is responsible for stopping dynamite fishing, yet also owns a dynamite production business, for example; or the fact that all the houses near the waterfront are marked for demolition because the local mayor wants a perfect beach for his new hotel and has dragged up some old law to force everyone to demolish their houses (at their own expense!). 'Please don't demolish my home' was written on one in the same red paint as the demolition cross. I just found it depressing, not my idea of a tropical paradise.

Lack of fish - everyhthing edible gets fished, so we saw very little of anything the locals consider big enough to catch (which isn't big).

Good points - loads of macro life, weird & funky stuff like frog fish, blue ringed octopus, mimic octopus, pygmy seahorses and every conceivable shape and colour of nudibranch. Very cheap to eat and stay, laid back service (to the point of occasionally forgetting your order), the locals are not pushy like you might expect in Egypt.

The harlequin mantis shrimp (above) - nearly lobster sized and quite capable of breaking the camera case with its punch, has to be my favourite Philippino critter.

[Index], [Trip Reports]
All information on this site is Copyright (C) Iain Crampton, Stingray Divers 2002-2006 unless otherwise noted, No re-use without permission. If you wish to use any material from this site please contact me, Thanks.