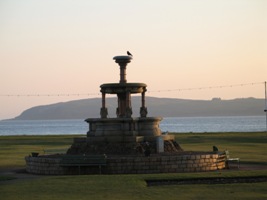 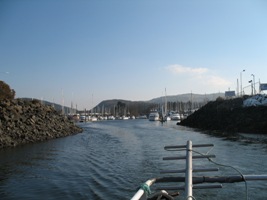 Six of us spent a great weekend in the spring sunshine, diving from the MV Clutha, giving our sport divers a chance to stretch their diving legs, and revisting a few favourites from last time.

The Beagle proved rather murky, but was covered in hordes of edible crabs.

The Akka was colourful as usual, and casued a bit of drama. Andrew, Paddy, Roger and Lee had a good time, but, but T got a fin in the face from a passing diver and I had a fight with the rope from old lobster pot. After clearing that mess up, being back on the boat with a cup of tea in hand seemed like a good idea, so we didn't stay down long.

Largs was much more lively this time round, The George provided dinner - Paddy sampled the Haggis and found he didn't like it that much. Lee needed a drink after marking a load of school coursework. All of us caught the sun (it was indeed sunny, see photos).

Sunday brought clouds and found us diving the Wallachia - which is very picturesque with its coating of brittle stars and anemones, a colony of little nudibranchs and (nice to see) a shoal of young pollack or saithe (I'm never sure which is which). Also a couple of huge gobies and some butterfish. The surface current was horrendous, but down in the depths it was wonderfully still.

In the afternoon the sun re-appeared and we moved onto the Greenock. The skipper had lost her grapnel the last time on this wreck. (A larger and rather new looking yellow one was used this time round). We found the old one almost immediately and did a bit of lugging and knot tying to be sure both came back up. After that warming exercise, we settled into explore the wreck, finning up to the bow and then drifting in the gentle current back down to the stern, taking in the scenery.